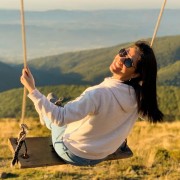 Netflix was awarded 42 nominations for the 2021 Golden Globes.

After 2 quarantines and 1 prophylactic isolation, and having drowned on Netflix, I think I’m quite suitable to present you the top 10 series and movies: Our Top Netflix 2021.

There are many options available in the Netflix catalog and so the question arises: what to choose? Check out the titles I chose below and get to know the reason for my choice!

We have comedy, drama, action and adventure, horror, suspense… I’m sure it will help you! In the 1950s, a girl in an orphanage reveals a prodigious talent for chess and begins an unlikely rise to stardom as she struggles with addiction.

Eight thieves take hostages and lock themselves inside Spain’s Royal Mint, while a criminal mastermind manipulates the police to carry out his plan.

A naive young woman is manipulated by her boyfriend and ends up being sentenced to a prison sentence – and now she will have to learn to survive in a new and harsh reality.

A Hasidic Jewish woman from Brooklyn escapes from an arranged wedding and goes to Berlin, where a group of musicians welcomes her… until the past comes knocking on her door.

Inspired by the adventures of Arsène Lupin, the thief in a tailcoat Assane Diop is determined to avenge his father for an injustice committed by a wealthy family.

Determined to raise his daughter alone, a widower and new father have to face grief, doubts, fears, and… dirty diapers. Inspired by a true story.

Kevin Hart stars in this touching film by Paul Weitz, based on a true story. With Alfre Woodard and Lil Rel Howery. After 18 years in prison, Álex takes revenge on the Lazcano family, who set him up for the murder of his sister Sara to save their reputation.

It’s official: another season will debut.

A court-appointed legal guardian defrauds elderly clients and deceives them under her guardianship. But her latest victim hides a dark secret.

Rosamund Pike won the Golden Globe for Best Actress thanks to this thriller with Peter Dinklage and Eiza González.

After a global catastrophe deprives humanity of the ability to sleep, an ex-military struggles to save her family, while society and reason sink in chaos.

Award-winning Gina Rodriguez (“Virgin Jane”) battles against time to save her family in this sci-fi thriller.

A wealthy older man and a naive university student engage in an intense relationship, marked by the exploration of the extremes of eroticism.

For other articles, take a look here.